Credentials
Board of Plastic & Cosmetic Surgery of Thailand

What do you need to consider before carrying out a sex change operation?
Our patients need to have felt as though they were a woman since a young age. We will not operate on those who just one day decide to transform their gender. They have to show significant commitment to living as that gender: dressing like a woman, taking female hormones, not playing with their original sexual organs.

Have any of your patients regretted their decision?
There was one German guy who passed the pre-operation evaluation. But within the next two years he came back and asked to be changed back. It is possible to do a penis implant but it will never be the same. We respect everybody’s decision. His psyche is still female; it was his family that forced him to do it.

Do you provide any post-operation counseling?
The operation is the final process. We don’t necessarily need to do that because we have fulfilled the patient’s needs and assessed that they are finally become a woman. They’re in perfectly good condition both physically and emotionally. If we had to provide post-operation counseling, that would mean we hadn’t carefully evaluated the patient to begin with.

Have you seen Thailand’s acceptance of transgender people change?
In the past they were really confined to small groups—men were fearful to express themselves as gay, let alone as women. Today, both the media and the number of people willing to come out set a better example for men in the same situation. But social acceptance doesn’t mean that the number [of gender reassignment patients] has changed. We have about 10 customers per month, which is the same as when I started.

How would you like to see the cosmetic surgery industry in Thailand change?
I would like to see more doctors working ethically. It doesn’t seem to be many doctors’ primary concern— so customers need to be careful with their decision. Do your research first and don’t think that you can achieve everything you see on the internet. 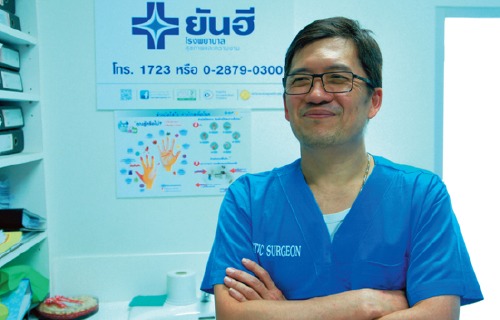